Yep. Hockey season is in full swing. The Pittsburgh Penguins had a rough go of it for a while, sustaining a 6-game losing streak, but stormed back with seven straight wins before the All-Star break. It’s amazing that they can play so well and win so much with all the devasting injuries the hockey gods have dealt them. Sid Crosby, the best player in all of hockey, played only a few games before suffering a recurrence of concussion symptoms, and no one knows when he will be back in the line-up. Kris Letang, the Pens all-star defenseman, was out for weeks and weeks with a concussion, but he’s finally returned to the line-up and is playing so well that he was invited to the All-Star game. But Jordan Staal is still out with a knee injury after missing half of last season with a foot injury he suffered during the playoffs of the season before that. And many other players have missed a significant number of games this season due to injuries. Injuries are a part of the game. Although the Penguins have suffered far more than their share of injuries, the team has continued to play pretty well thanks in part to all the talent they can bring up from their AHL affiliate, the Wilkes Barre-Scranton Penguins, aka, the Baby Pens. The Baby Pens play the same system of hockey that the Pens use, so when players are called up, they fit right in.

When I watch hockey, I knit. The two go together like peanut butter and jelly, like vanilla ice cream and Hershey’s chocolate syrup, like hamburgers and French fries. Why am I suddenly hungry? LOL But knitting while watching hockey requires the knitting to be of the mindless sort, something that doesn’t require concentration or much attention. The action in hockey is pretty non-stop, which is very different from, say, football in which a play is run, then there is a break in the action before the next play. In hockey, the action stops only if the puck goes out of play, a goal is scored, a penalty occurs, the goalie loses his mask, the net is knock off its moorings, or a fight breaks out. And for those of you who think that there is a lot of fighting in hockey, um, NO. The number of fights in NHL games has been dropping dramatically and will probably continue to do so. The teams are so competitive now that they don’t have room on their rosters for fighting specialists. I am hopeful that the NHL is moving toward banning fighting. Oh, I enjoy a good hockey fight as much as the next fan, but I really don’t think fighting belongs in the sport. The “benefits” of fighting are far outweighed by the detriments, in my opinion.

So, what qualifies as mindless hockey knitting? Last year, during the Stanley Cup Playoffs, I made hats. Hats are definitely mindless knitting. The year before, I made socks. For the most part socks are pretty mindless. But this season my hockey knitting has been a lace shawl. Most knitters wouldn’t consider lace to be mindless knitting, but mindless is in the eye of the beholder, and some lace patterns are simple and repetitive and thus qualify as mindless.

I would put the Sheelagh Shawl in the mindless category, even when knitting it in black, as I am. The pattern is deceptively easy, made up of lace stitches that are a snap to work if you know how to read your knitting, that is, you know where you are in the pattern by looking at the stitches from the previous pattern round. Knitting Sheelagh has been a bit of a saga. I explained how I started the shawl in a previous entry. I started out with 5 full skeins of Knit Picks Gloss Lace yarn in black, a full 2,200 yards of yarn, and didn’t even consider that wouldn’t be enough to finish the shawl. The edging used up almost all of 2 skeins, but I was still certain I had plenty of yarn. Even when I had used up the 3d and 4th skeins, I had no doubt. But when I started working with the 5th skein, I got that sinking feeling. I realized there was no way I’d be able to finish the shawl.

No problem, I thought. I’ll just order another skein from Knit Picks. Heck, it will probably be the same dye lot since it wasn’t all that long ago that I purchased the yarn. So I go to the K-P website and click on Gloss Lace and get ready to select “Black,” when my breath is taken away by the words, “Available soon.” Oh, no! I’ll have to wait a couple of weeks and the dye lot will be different.” But still, panic did not sink in. I would just keep working on Sheelagh until there was just a little bit of yarn left, enough to work several rounds so that I could alternate the new dye lot with the old so that it would blend in. Every day I would check the K-P website to see when the black Gloss Lace would be available. I mean, “soon” is relative, right? Finally, just when I had reached the point where I had to stop working on Sheelagh, I checked K-P and saw that they had a date when the black Gloss Lace would be available again–May 25. May 25?!?!?!?!?!?! I simply could not even consider waiting that long to finish Sheelagh. If I put her aside, I might lose my Sheelagh mojo, and who knows when I might regain it? What’s a knitter to do?

Running short of yarn on a project and not being able to get more is one of a knitter’s worst nightmares. But we now have a wonderful resource called Ravelry. I searched on Ravelry and found a couple dozen knitters who had black Gloss Lace yarn in their stashes. Several had the same dye lot as mine, and one knitter had finished her project and had a skein left over. I contacted her and asked whether she would be willing to sell or trade for the skein. She replied almost immediately, and she was willing to make a trade. So we made a deal, and a few days later, I had the yarn I needed to finish my shawl in my hot little hands, and she had a couple of balls of a very cushy, soft sock yarn. We are both happy, and it all happened through the magic that is Ravelry. And thanks to her, Sheelagh is now a finished object. 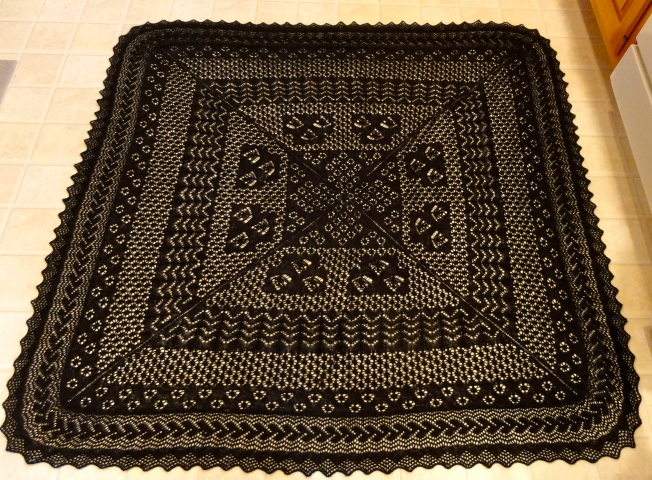 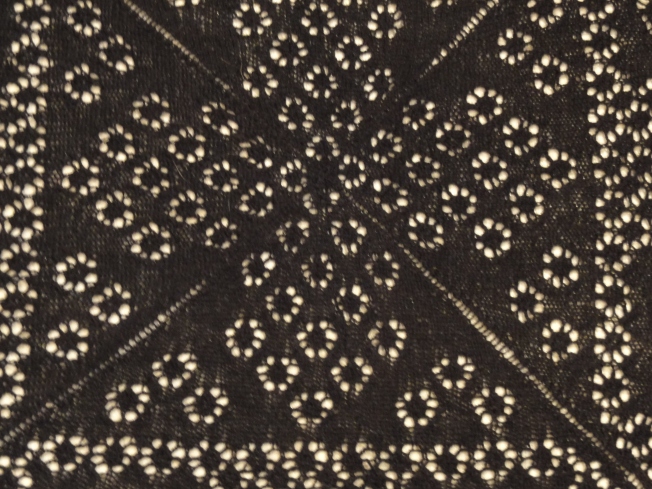 5 thoughts on “‘Tis The Season”