As you know, I have set a goal to knit 12 pairs of socks before the end of 2013, and I’m right on target. My first pair of 2013 socks is finished. Ladies and gentlemen, I proudly present my Reversible Ribs Socks! 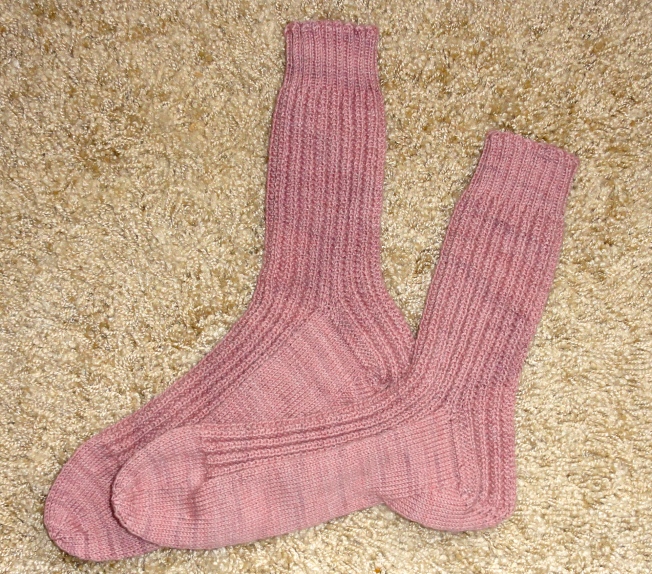 Yeah, I know. I actually started these socks on December 23, 2012, but I had only knitted a very small amount on sock #1 before setting it aside to work on other stuff, and I didn’t pick it up again until 2013, so I decided that these socks count toward my goal.

Anyway, I love this particular stitch pattern for socks knitted in solid or semi-solid colors. It has a lot of texture and it is simple but fun to knit.  I decided to continue the rib pattern down the heel flap instead of using heel stitch or eye of partridge stitch, and I really like the way it flows. Another plus is that the ribbing makes the heel flap really hug the heel. I already told you about the heel gusset decreases I used for this sock here, but I wanted to share a picture of how the heel looks on the finished sock when it is being worn.

Gusset decreases are on the sole instead of the instep.

The combination of such a stretchy, ribby heel flap combined with the placement of the gusset decreases produced a sock heel that wraps itself snuggly around my heel, arch, and instep. It’s the best fitting heel I’ve ever knitted, and it looks great, too. I was afraid I’d be able to feel the bumps where two stitches are knitted together, but I can’t.
I think that from now on, I will be placing the gusset decreases on the foot of the sock more often than not, but I will definitely be tinkering around with exactly where to place the increases. Because of the length of my heel flap–and I need a long heel flap because I have a high instep–the gusset decreases begin a little above the end of the heel turn, and I think it looks just a wee bit wonky because of that. I have a sock OTN that has reached the heel-flap stage, and I plan to place the gusset decreases on either side of the two center stitches of the heel. I’m using Scullers Socks as a guide, although I certainly could have figured it out for myself. It isn’t rocket science or plasma physics, after all. So why reinvent the wheel when another knitter has ever so kindly already invented it for you? 😀