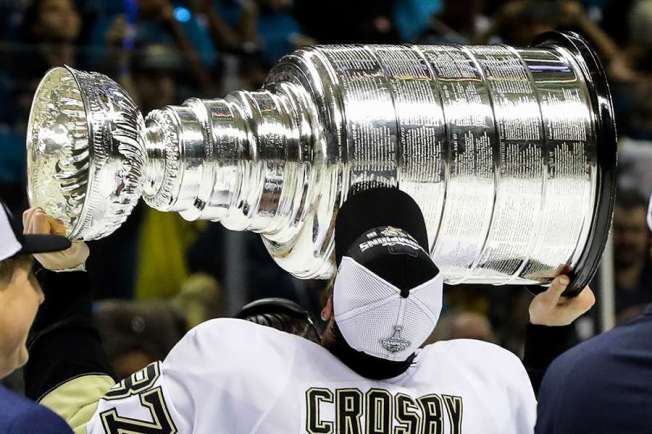 As you know, in addition to being an avid knitter and spinner, I am also a sports fan and a self-described hockey nut. I love watching ice hockey, and I’m a big fan of the NHL. So big a fan, in fact, that my husband has started buying me Center Ice for my birthday every year so that I can totally pig out on hockey.

My very favorite hockey team is the Pittsburgh Penguins, and since we now live in Pittsburgh, we are able to actually attend some games instead of just watching on television. The DH and I attended four games this past hockey season and saw the Pens win three time and lose only once, and that was in OT.

It was a rough season for the Penguins. Second year head coach Mike Johnston seemed to be in way over his head, and the boys didn’t look like they were enjoying themselves on the ice. They were inconsistent from one game to the next, losing more games than they should have given the level of talent on the team, and playing the most boring style of hockey imaginable.

Thankfully, after a couple of months, GM Jim Rutherford saw fit to fire Johnston and bring up Mike Sullivan, head coach of the Penguins’ AHL affiliate in Wilkes-Barre/Scranton, to take over the duties as bench boss. He also realized the team needed more speed if they were to turn things around, and he made some brilliant trades to achieve this. Between the acquisitions last summer and before the trade deadline in February and players brought up from WBS, the team was revamped and went from being a slow, plodding, boring team to an offensive and defensive juggernaut driven by skill and speed.

When Sully took over the team, they were out of a playoff spot, but that soon changed. The Penguins moved up to a wildcard spot in the standings, then made a charge in the month of March that pushed them up into a solid second place in their division.

Playoff hockey started in April, and the Penguins had a tough row to hoe. In the first round they faced a strong, physical New York Rangers team; in the second, they went up against the winningest team during the regular season, the Washington Capitals; in the third round, they had to play against last year’s Stanley Cup Finals finalist, the Tampa Bay Lightning.

Going into the first round, we were without our starting goalie, Marc-Andre Fleury, and our back-up goalie, Matt Murray. The third goalie, Jeff Zatkoff, stepped up to the plate and won the first game of the series, but lost in the second game. Fortunately, Murray was able to return to the line-up, and except for a hiccup when he was pulled in the third period of a game and sat out the next game, he played brilliantly and joined an elite group of goalies who have won 15 games in the Stanley Cup playoffs as rookies.

Going into the final series, the Penguins were up against the Western Conference Champions, the San Jose Sharks. Not many people outside the Pittsburgh fan base were giving the Penguins much of a chance. In the past 10 years, the Western Conference has won most of the finals, and the sports pundits all seemed to think that the bigger, harder-hitting Sharks would overcome the skill and speed of the Penguins. But there’s a reason why the games are played. Reality painted a different picture. The speed and skill of the Penguins neutralized the Sharks’ attack, and the Penguins won the best-of-seven series in six games, holding the Sharks to just two shots in the third period of game five in San Jose. It’s hard to score if you cannot get the puck to the net, eh?

Had it not been for the stellar goaltending of the Sharks’ goalie, Martin Jones, the Penguins may well have swept the series and every game probably would have been a rout.

The Penguins faced and overcame a lot of adversity to make it to pinnacle of sport, and for us fans, it was amazing to watch this team go from being directionless to being single-mindedly focused on playing the best hockey they could play. The young players who were called up from WBS to become starters or to fill in temporarily for injured players fit in smoothly, and the newcomers quickly developed chemistry with veteran Penguins and with each other. Coach Sullivan was able to put four strong lines out on the ice knowing each line would play well in all three zones, and all three defensive pairings were reliable. Add the solid netminding of Fleury and Murray and you have the perfect recipe for winning Lord Stanley’s Cup. 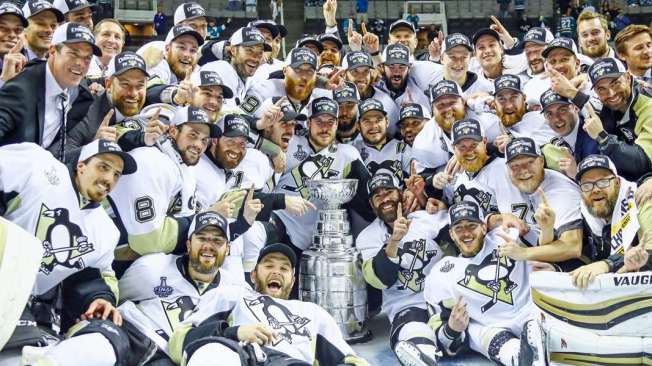 Let’s do this again next year!