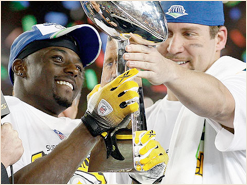 Yesterday evening, like many millions of people, I watched Super Bowl XLIII. It was one of the most exciting nail-biters I have ever seen. Both the Pittsburgh Steelers and the Phoenix Cardinals played very well, and the game went down to the wire. But through the heroic efforts of Santonio Holmes and Ben Roethlisberger, pictured above, the Steelers scored the go-ahead touchdown with 35 seconds left in the game, and the mighty Steelers defense stopped the Cards’ last-ditch scoring effort by forcing a fumble and recovering the ball. It couldn’t have been much closer.

Since I am a fan of the Pittsburgh Steelers, whose victory, btw, was a record-setting sixth Super Bowl win, I found the game nerve-wracking, to say the least. The only thing that kept me somewhat calm during the game was my knitting. I worked on my Fair Isle sampler during the first half of the game, but I had to set it aside in the second half because the game was just too close for me to be able to concentrate on two-handed stranded colorwork knitting.

For the second half, I picked up my Foothill Road Aran and did some ripping back, again. This pattern is just whipping my ass. Before last night, I had already frogged and reknitted the back when I realized that the heart-shaped cables were upside down as charted. And I had already frogged and reknitted a second time when  I realized I had an extra purl stitch between cables. Just dropping the extra stitch and laddering it down didn’t work. I couldn’t even out the stitches because of the cable crossings, so I ended up frogging. Fortunately, it was the left front that had the mistake and I didn’t have to frog the right front too.

Anyway, last night I decided I needed to redo the sleeve I had started because it was puckering slightly where I had picked up the stitches. I ripped out the almost 2 inches of sleeve I had knitted, then decided to frog the front and the back by a couple of rows to shorten the armhole by about a quarter of an inch. I think this will take care of the puckering.

As for the Fair Isle sampler, I’m afraid to look at it. Did my anxiety while watching the big game affect my knitting tension? Will the stranded work be all puckered? Will I have to frog back and reknit? Stay tuned for the next installment of “All My Knitting.”☺