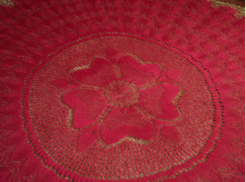 In a previous blog entry, I wrote about how I’m something of an “extreme” knitter. I didn’t make up the label; it was given to me and other lace knitters who eschew lifelines on the Laceknitters Yahoo!Group.

I say, quit being a wussy. I made the Rose of England shawl entirely without lifelines, and the world did not come to an end. Lifelines are for sissies. They are a PITA (pain in the ass) to put in and an even bigger PITA to take out, and they really aren’t a help unless you are knitting with a very, very slippery yarn. A dropped stitch won’t run very far (unless you are knitting with a very slippery yarn, so wise up and don’t knit lace with slippery yarns), and picking up live stitches is a lot easier to do if the stitches aren’t ducking down into the stitch below like little turtles pulling their heads in their shells as stitches on a string are wont to do. But that’s just my opinion, my preference. YMMV. You do things the way you want to do them. But please, please, don’t tell me or any other knitter that I simply must use lifelines.

I may be adventurous and bold in the world of knitting, but when it comes to my computers, I’m as cautious as can be. Too cautious, some might say. But I say that when you are dealing with electronic media, there’s no such thing as too cautious.

I back up, and back up, then back up again. I have so many back-ups, I need a spreadsheet to keep up with them. And, of course, I have to back up the spreadsheet.☺

Here’s how hopelessly geeky I am. I now have three, count ‘em, three external hard drives. One is an old 30 GB hard drive that I salvaged from my mother’s old Compaq computer and put into an i-rocks enclosure. The hard drive is a Quantum Fireball. Isn’t that a grand name for a hard drive? I use the Quantum Fireball to store copies of my iPhoto Library, knitting files, and other important stuff that I would hate to lose or try to recreate. I update it monthly, and keep it in a secure place in between updates.

I also have a Seagate FreeAgent Desk external hard drive that I bought specifically to use with my iMac to make Time Machine back-ups and also to make and store a bootable clone. This drive is 1 TB–that’s a big honkin’ hard drive. LOL

You’d think I’d be satisfied to rest on my laurels of geekitude, but no. I really must have a bootable clone of my MacBook, too. I mean, whatever would I do were my MacBook’s hard drive to fail? Yes, Virginia, hard drives do fail. They really do. I really had little choice but to buy a 750 GB Seagate Barracuda hard drive…

and an enclosure for it. Every hard drive deserves a good home. ☺

This is the second time I have installed a hard drive into an enclosure and let me tell you, it’s easy as pie. Do not be afraid to attempt this task at home. If I can do it, anyone can do it.

After partitioning the new Barracuda, I cloned (made an exact copy of) the MacBook and the iMac. Well, I didn’t actually do the cloning myself, of course. I used a really great application called SuperDuper to accomplish this fabulous feat.

Yes, that’s right, I now have two bootable clones of my iMac. One is on the FreeAgent drive that is connected to my iMac all the time. It updates itself automatically every Sunday. The other is on the new 750GB Barracuda. I don’t keep it connected to either Mac. Instead, I store in a safe place. I will update it manually once a month, and I put a recurring reminder in iCal so I won’t forget. Since SuperDuper has a “smart update” feature that will update only the files that have changed, updating is quick and easy.

You may think this is overkill, but you ain’t heard nuthin’ yet. In addition to these three external hard drives, I also store copies of my iPhoto library and other important documents on a remote server via my MobileMe iDisk (it’s an Apple thing). All of my purchased iTunes music is backed up on CD, and every month I back up my iPhoto library on DVDs. And then there are the flash drives. I won’t even go there. When the apocalypse strikes, I’ll be the first to have my computers back up and running. LOL