How many times have I opened Alice Starmore’s Aran Knitting and gazed longingly at the picture of St. Enda,

trying hard not to drool on the page? Too many to count. I dreamed of knitting this sweater, thought about what yarn I would use, what techniques for its construction, how the cables would feel, how beautiful the finished sweater would be. But never once did I think that St. Enda would be a pretty quick knit.

When I cast on for this sweater back on October 6th, I was hoping that I would be able to finish it in time to give it to my son for the Winter Solstice holiday, but I wasn’t optimistic that my time frame was realistic. In fact, I thought I was a first class fool to think that I could complete this sweater in only two-and-a-half months. 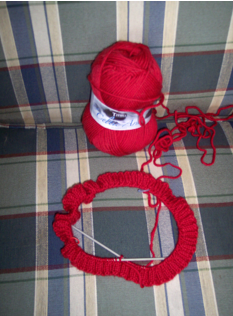 St. Enda has grown quite rapidly.

I now have both sleeves started… 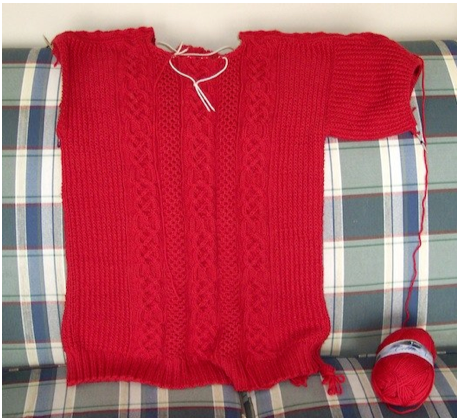 and, although sleeves seem to always take longer than you expect, I’m confident that, barring any unforeseen calamity, I’ll have both sleeves done by the time December arrives on my doorstep.

Next week the boy, who is the intended recipient of the sweater, will be here for the Thanksgiving holiday. I want to have at least one sleeve near completion so that I can try the sweater on him and get the length of the sleeves correct. I’m feeling very gruntled at the moment, and that scares the bejeebers out of me. I hope I’m not tempting fate. LOL

Anyway, the knitting has gone very smoothly. The central cable looks complicated, and it does have a rather unusual increase that takes two rows to complete, but the directions are clear and the increase is simpler to do than it sounds.

Naturally, I’m not knitting the pattern as written. I toyed around with knitting it FLAK-style, all in one piece from the top down, starting with the saddles, but I was too intellectually lazy to do the math.☺ Instead, I started at the bottom, but I’m knitting in the round instead of flat so that I don’t have to seam pieces together. I hate seaming. I also changed the bottom rib. Instead of doing the lovely cabled rib, I did a 2 x 2 rib instead. I’ll do the same ribbing on the cuffs and the neckband when the time comes. The boy doesn’t like his sweaters to be too frou-frou. 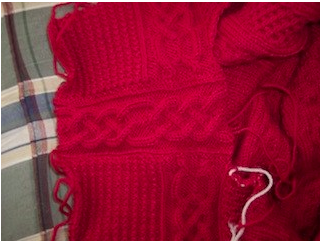 This gives me a nice firm edge that will hold the weight of the sweater with no problem. The shoulder seams are the only seams in the entire sweater. Did I ever mention I hate seaming?

Converting this sweater to knitting in the round has been pretty simple, but there have been a few glitches. Starmore wrote the pattern to a specific row gauge and instructs the knitter to stop knitting after completing a certain number of rows of the main cable stitch rather than after the piece measures x cm or in. If my row gauge was the same as hers, this wouldn’t be a problem. But my row gauge is shorter than hers, meaning I’m getting more rows to the inch than she did and therefore I need to knit more rows to get the same length she did. Fortunately, her patterns include schematics that show the length of various parts of the sweater. (The chart with the measurements of the corresponding parts of the sweaters is out of view in the photograph.) And I have a record of the measurements of other sweaters I have made for the boy, so I have been able to cope with my wonky row gauge. I’m used to dealing with a row gauge that isn’t even close to the row gauge stated in the pattern.☺

This is the point at which I must once again state unequivocally that I would never have had the confidence to change the method of construction had I not participated in Janet Szabo’s Follow-the-Leader Aran Knit-Along (FLAK). Janet rules!