Wow! I’ve let a lot of time pass without posting a new entry to this here blog. I joined Facebook, and, boy oh boy, is that ever a time suck. But I’ve been a busy knitter in spite of FB. My Dale of Norway Foxes sweater is progressing quite quickly. The body is finished, and sleeve #1 is 2/3s completed. Looks pretty darned good, doncha’ think?

Aren’t the foxes adorable? Look at their cute pointy faces and their white-tipped tails. Make you go, “Awwwww!” 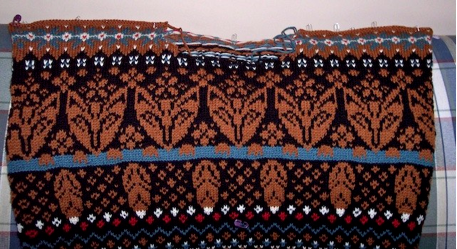 When I made the DoN Gjende, I ended up with sleeves that were way too long. I ripped back as far as I could without having to rip out the patterned section and shortened them as much as possible, but they are still about 1.5 inches too long. I could have shortened them more by picking up stitches an inch or so above the hem turn, cutting the bottom off, and reknitting the hem, but then I would have had to mess with the sleeve increases, so I left them as is.

I didn’t want to have the same problem with Foxes, so I used a provisional cast on and started with the patterned section. 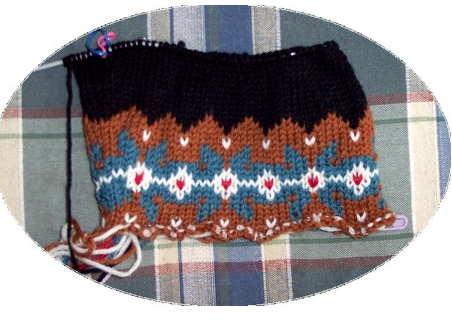 I have a lot more of the sleeve done now, but I’m too lazy to take a picture of it. LOL

After the sweater is completed and washed and blocked, I’ll try it on and then knit the cuffs to fit. Foxes has a ribbed cuff instead of a hemmed one, so I could have gone ahead and started with the cuff. Had the sleeves been too long, the cuff could simply be folded up to adjust the length. But I don’t want a folded cuff on this sweater.

Foxes is a much easier knit than Gjende was. The main difference is that the chest pattern of Gjende is one big pattern. You knit it once for the front, then again for the back. I had to keep a very close eye on the chart when I was knitting it. The pattern goes to the center stitch, then is a mirror image.

Foxes is a repeating pattern that is very easy to memorize, and the knitting is easy to read, too, so I can use the row I just knitted as a landmark for placing the colors in the row I’m knitting. Does that make sense to you, dear reader? If you are a knitter, you’ll get it. If you aren’t, you probably aren’t reading this blog, unless you are my husband. (Hi, Sweetie!)

I really love knitting Dale of Norway sweaters and now have quite a few of them in my queue. I have yarn in my stash yarn for two Dale sweaters–the now discontinued Tiur, which I bought a couple of years ago when the rumor was rife that it was going to be discontinued. DoN at the time denied the rumor, but it was true–so there are at least two DoNs in my knitting future. No, make that three, because just this week I ordered Heilo to make St. Moritz. I’m hoping that once I complete this sweater and put it on, it will transform my appearance and I’ll look just like the model. LOL

The yarn should arrive to day. I know. I’m bad. Oh, well. Whatcha’ gonna do?☺