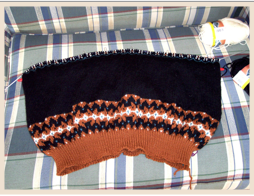 I hope that this doesn’t come as a shock to you, dear reader, but I sometimes swear like a proverbial sailor. You wouldn’t believe some of the words that come out of my mouth. Heck, I can even swear in Latin. But you don’t see a lot of bad language here on my blog because I know such language is offensive to many people, and I want my blog to be a place where I can share my thoughts on knitting with other knitters. That’s why I have included a picture of the progress I have made on my latest sweater, the Foxes sweater from Dale of Norway. Trust me, this sweater has made me swear more than once, but so far it has been a really easy knit. It’s just that I have a little difficulty sometimes with my reading comprehension, and I ended up “miscentering” Pattern II and had to make a few adjustments when it came time to start the pattern with the foxes. But after uttering a few choice words when I discovered my error, I quickly figure out the best way to correct it and, no, it didn’t involve any ripping out of stitches. I just made a small change to where the round begins and now all is right in the world. Or at least in my little world.

Although I cuss copiously in my daily life, I don’t do so in these pages because I don’t want to be unnecessarily discourteous. And, yes, I think there are times when being discourteous is necessary, but that’s a rant for another day. LOL It seems that there are more than a few people in this world who find swearing extremely offensive. I don’t get it; most so-called bad words don’t bother me. But I do understand that they bother some people, even if I don’t understand why they bother some people.

You may be thinking, whatever in the world has caused Pinko Knitter to write about cussing? What a strange topic for a blog that purports to be primarily about knitting! Well, not really. Here’s the story. (WARNING: There are two “bad words” used in this entry. One is used several times and is fairly innocuous, in my opinion. The other is used only once, in a rather academic context. If you are offended by seeing the so-call “f word” spelled out, read no further. You have been warned.)

As you may know, I belong to a number of Yahoo Groups devoted to various knitting topics ranging from lace to Aran to Fair Isle to the designs of just one particular designer. I belong to two lists in the latter category. Really. I do. Two lists. Each devoted entirely to the designs of one particular designer; one for the designs of MMario and one for Sharon Miller’s lovely designs. Three, if you count the EZasPi list as being devoted to the designs of Elizabeth Zimmermann. Anyway, I digress. Where was I? Oh, yeah. I have written before in these pages that sometimes knitting lists erupt into, if not all-out flame wars, flame skirmishes. There are a few topics that are almost guaranteed to raise hackles and spark flames–copyright, the best way to knit, whether lifelines are absolutely necessary, and, of course, anything of a religious or political nature. These dust-ups are all pretty predictable, repetitive, and b-o-r-i-n-g.

But a few days ago a kerfuffle erupted on one of my lists that was, um, interesting, to say the least. Here’s what started it. Some members of the group decided that they would like to have a KAL (knit-along) for a particular pattern. There was some discussion of how the KAL should be set up. There was some back-and-forth discussion about the various options which was pretty typical of the conversations sparked by the organizing of KALs.

Everything was pretty typical, that is, until, in the course of the discussion, Ravelry was suggested as an option and all hell, er, heck broke loose. When one list member responded to another’s complaint that Ravelry was rife with technical problems by saying that those technical problems were resolved long ago and that Ravelry’s owners wanted everyone to be happy with Ravelry, another list member wrote to say, “Nuh uh! The owners of Ravelry do not want everyone to be happy.” (She didn’t actually say “Nuh uh, but I’m pretty sure she was thinking it.)

Now, dear reader, I bet dollars to doughnuts you are wondering why this person is so goshdurned certain that the owners of Ravelry don’t want everyone to be happy with Ravelry. You are probably thinking to yourself, “I bet this has something to do with cuss words.” Bingo! Her evidence proving Ravlery’s indifference to their users’ satisfaction with Ravelry is that they allow content that she finds offensive and refused to remove it upon her demand.

The offending content involved a couple of patterns she had come across on Ravelry that included words she didn’t like–shit and fuck. Of course, she didn’t write out either of the words, but there’s no mistaking to what words “sh*t” and “f bomb” refer. I don’t quite understand how writing shit as sh*t makes it any less offensive, but that’s just me. For my money, shit is a perfectly good word and I don’t understand why it offends anyone. But then, my mother actually taught me to say shit rather than poop when I was very young because she really hated the word poop. In our household, shit was always, well, shit. ☺

Okay, back on topic. This person was also offended by Ravelry’s inclusion of a pattern for a crocheted penis in its archives. I’m not sure what sort of search terms she was using that led her to a pattern for a crocheted penis, but all this terribly offensive material appeared on her computer screen as she was navigating Ravelry in the presence of two of her nieces, and that made the offense even worse in her eyes. She seems to feel her nieces were terribly damaged by seeing a couple of cuss words and a crocheted penis.

So she did what any red-blooded ‘Merkin would do and complained to Ravelry. And Ravelry’s owners responded to her complaint. They explained that the patterns didn’t violate their terms of use and said they were considering making a mature section for such material. Sounds pretty reasonable, doesn’t it? But some people don’t know reasonable even when it kicks them in the head. Because Ravelry didn’t agree with the complainer that this material and any like it should and would be removed from Ravelry, that means that her opinion doesn’t count and wasn’t listened to. Um, it sure sounds to me as though Ravelry listened to her opinion, gave it careful consideration, and then gave a reasonable response. But it wasn’t the response she wanted. So she decried Ravelry’s desire to appeal to younger knitters with their “hip, edgy style.” Apparently she thinks that Ravelry should cater to the older, conservative, stereotypical knitting grandma and those youngsters be damned. Who do they think they are, anyway, with their bad words and crocheted penises?

Dear reader, I know that you are very intelligent and perceptive. You are, after all, reading my blog. So you have probably surmised what happened next. That’s right. Someone else wrote in to say that people who use foul language do so because they lack a good moral background. Yep. People who cuss are immoral. Could it get any more ridiculous?

Well, yes, it could and it did. The woman who started it all by complaining that Ravelry didn’t cave to her wishes to purge itself of anything she found offensive then accused the list members who had written to disagree with her of slandering her. Yikes!

But you will be very proud of me. I didn’t inject myself into this situation. I actually kept my big mouth shut. Which is very difficult for me to do. I just sat back with my arms folded and watched the fireworks.

And this all just goes to show that in the world of knitting, there’s never a dull moment. Never. Ever. And with that, this moral degenerate will say, Th-Th-That’s all, folks!