As the Stanley Cup playoffs progress, so my knitting projects progress. After getting their asses kicked in three straight games, and behaving very poorly in game 3, my beloved Pittsburgh Penguins did some ass-kicking of their own in game 4 against the Philadelphia F%^ers, defeating their cross-state rival 10-3. It was a very satisfying victory for many reasons. First of all, it keeps the Pens alive in their run for The Cup. Although it is improbable that the Pens will be able to win the next three games, it is by no means impossible. Secondly, the Pens brought their A game, something that has been missing in action for several weeks. If the Pens can continue to play at that level, they have an excellent chance to win the series. Make no mistake, Philly has a very skilled hockey team; but the Pens at their best will beat the F%^ers at their best every single time.

On the knitting front, I’ve been working some on the Blue Teardrops Scarf. 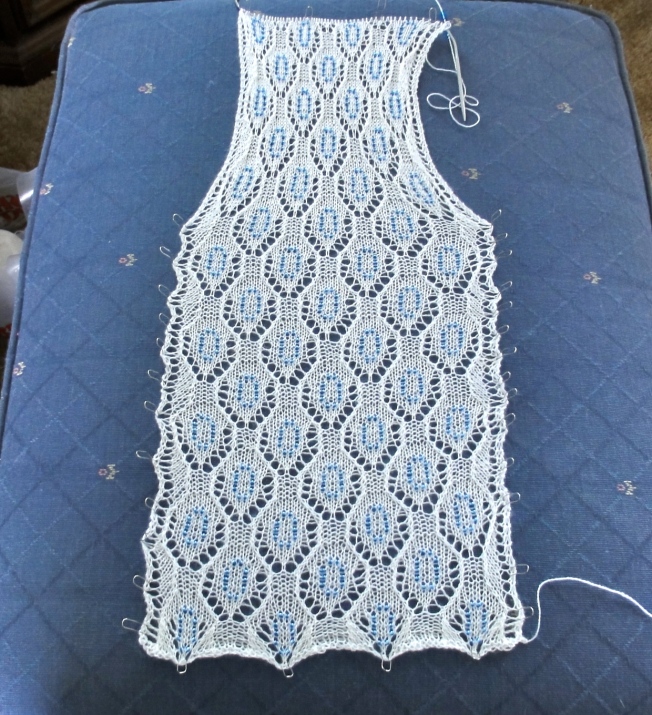 I undid the provisional cast-on and finished it with a sewn cast-off, and I like the results.

It looks neat and polished, and it’s very stretchy. I’ll use the same cast-off for the other end, and both ends will match. BTW, aren’t the 8/0 beads nice and sparkly?

I also started two new, mindless projects–scarves for Comfort Scarves- Southwestern Pennsylvania. When sorting through my yarn stash during the Spring cleaning frenzy, I uncovered a half dozen or so balls of Lion Brand Jiffy, a bulky faux fuzzy mohair yarn, in cotton candy pink. When Barb of Comfort Scarves put out a call on Ravelry for more scarves due, sadly, to an increased need–meaning that incidents of domestic violence have increased–I though of the Jiffy I had bought many years ago to use for baby blankets that was now sitting in a storage bin in my garage. I dug it out, found some simple, lacy scarf patterns on Ravelry, and cast on.

The Lacy Rib Scarf is a simple two-row pattern worked on 20 stitches (multiple of 4): 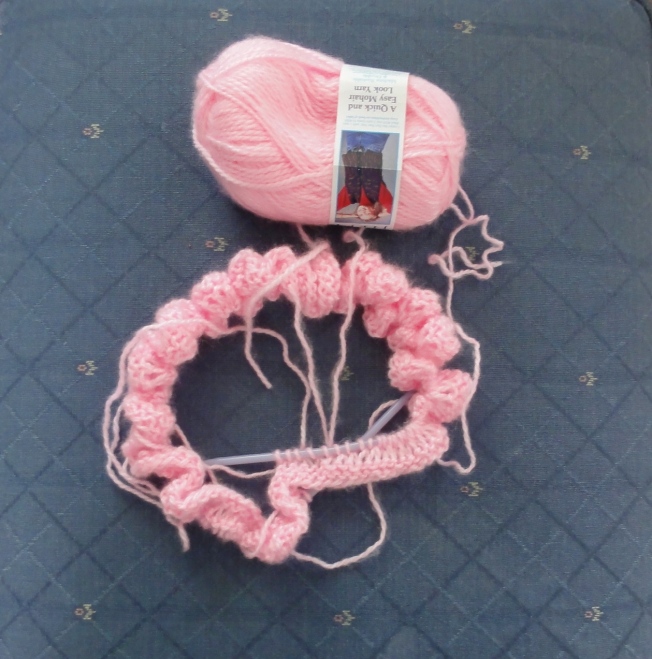 The Dropped Stitch Scarf is worked from side to side in garter stitch. I cast on 250 stitches because I’m getting approximately 4 stitches per inch with this yarn on US size 10 needles, and 250 stitches should give me a scarf that is between 60 and 62 inches in length.  The pattern is a simple four-row repeat:

Repeat these 4 rows until the scarf is the desired width, ending with row 2.

I don’t know how many more of these scarves I’ll complete in the next few weeks because knitting with acrylic yarn is not my favorite thing to do. Acrylic is very ungiving and working with it makes my hands and wrists hurt. But I will persevere and finish at least two of these scarves and get them in the mail to Barb. If a woman in crisis can find comfort in something I have knitted for her, a little bit of hand and wrist pain is a small price to pay. Her pain is something I cannot fathom, and if I can give her hope by doing this small thing, how can I not do it?