My Faded Roses Graham-finity Cowl has been washed and blocked, and it is now dry. I’m pretty happy with how it turned out. As I suspected, it did grow quite a bit when I washed it. I’ll admit I was a teeny bit worried because it was a little on the small side when I took it off the needles, and because it’s a cowl, I didn’t bother to swatch. Even if it had ended up being a little small, it would have fit someone. 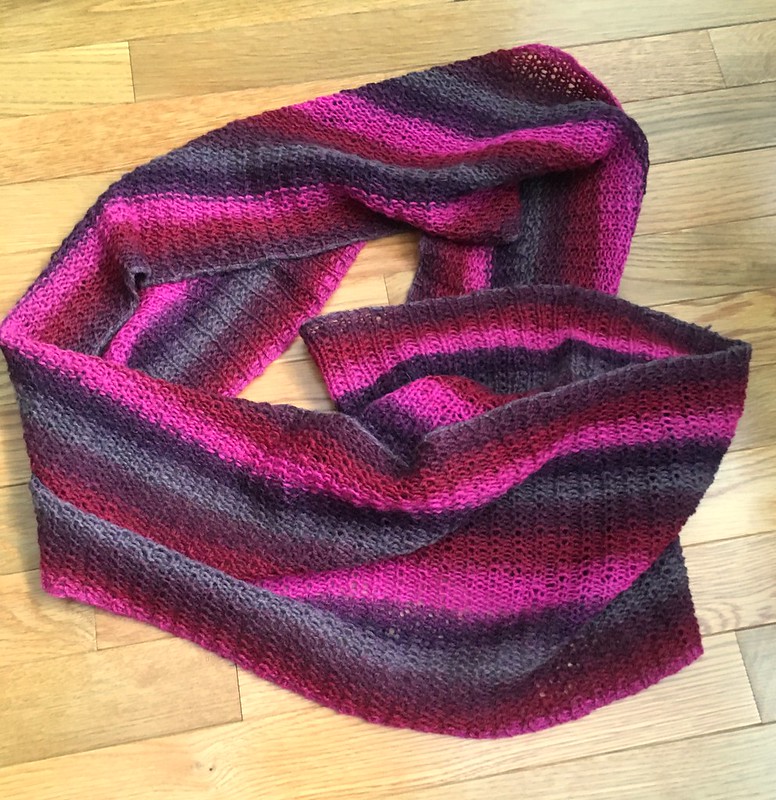 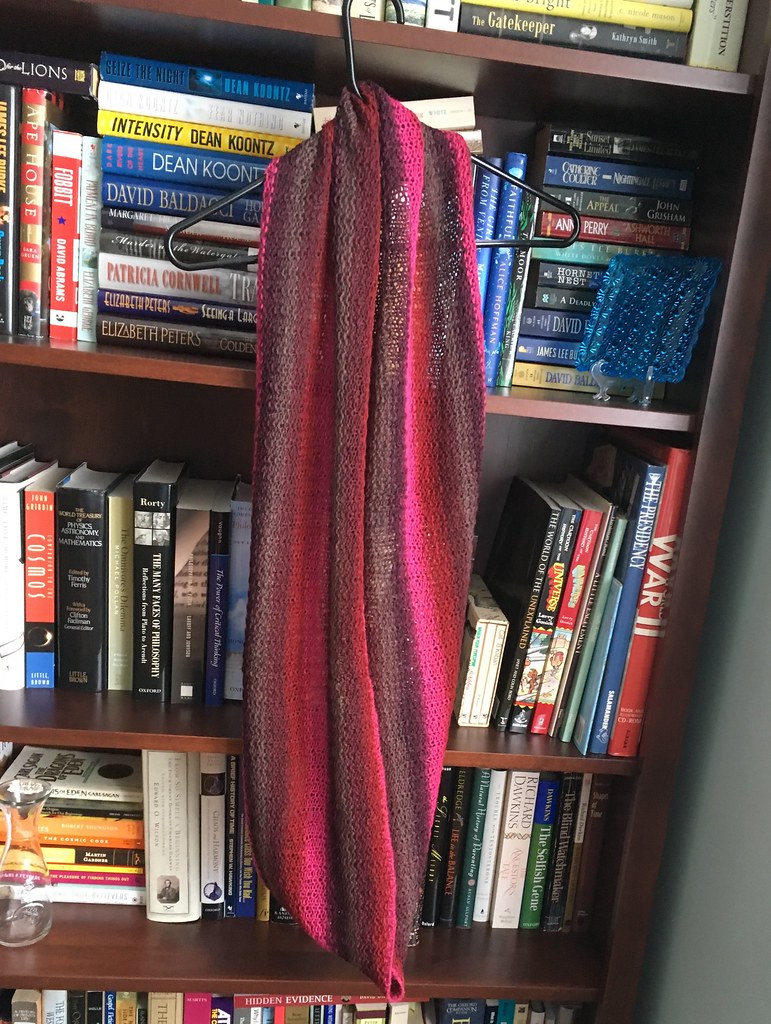 If you wear the cowl as a single loop, it’s pretty long and it’s wide enough that it will cover your chest and keep it warm under your coat. 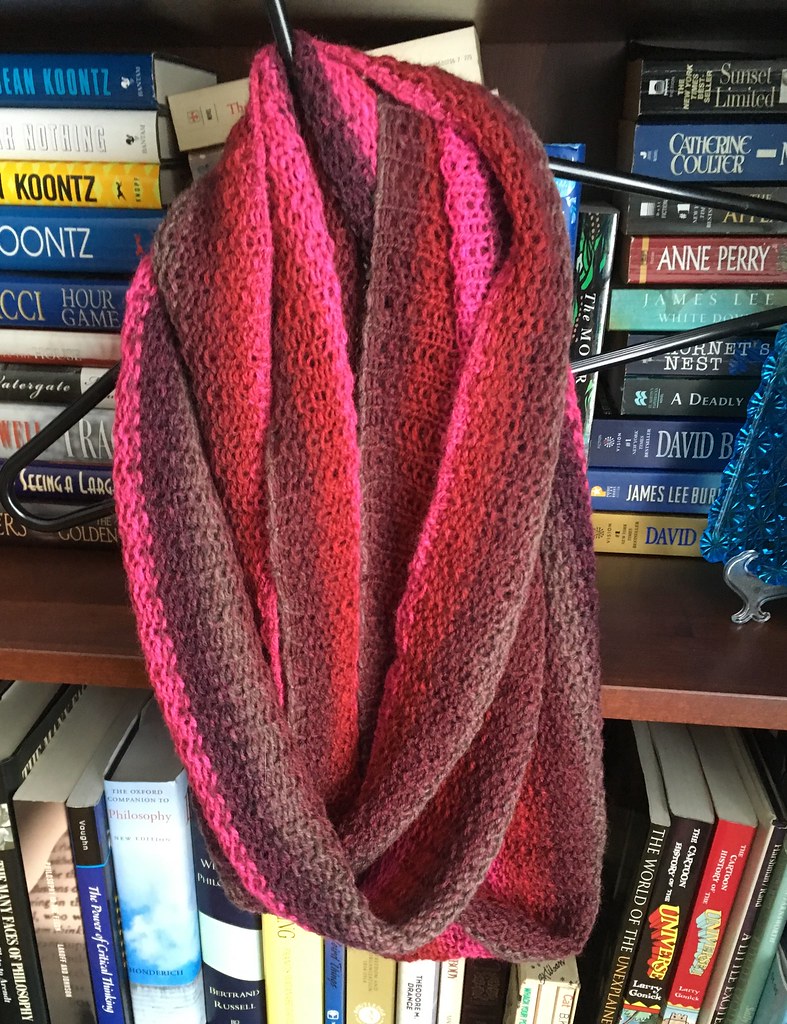 Worn as a double loop, the cowl is sure to keep your neck warm, and if your head and ears get cold, you can pull one of the loops up over your head for added warmth there. 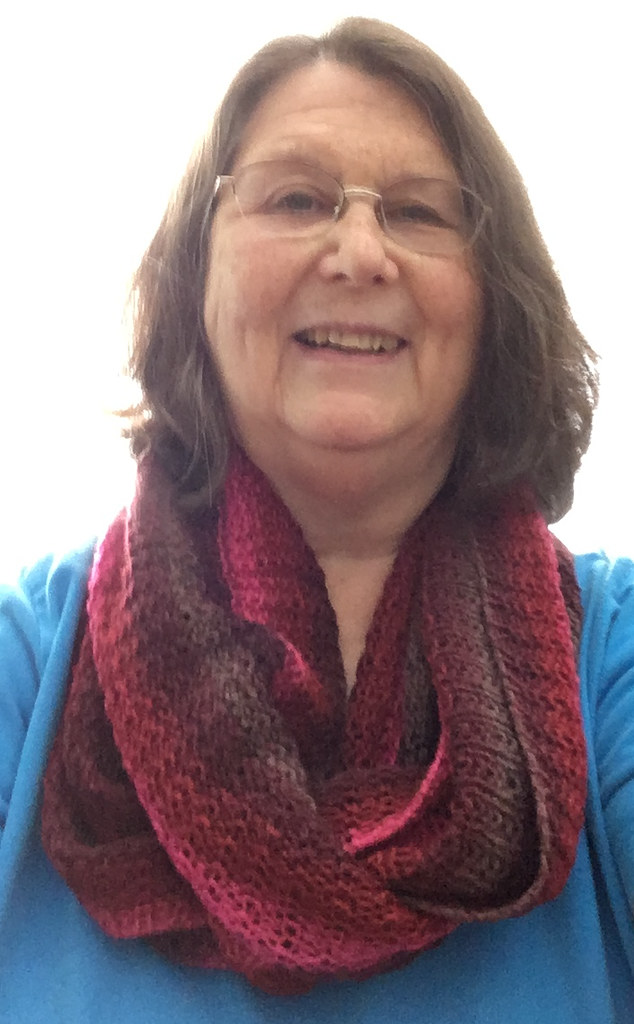 My iPhone doesn’t take the best pictures because the selfie camera isn’t the greatest, bit you can still get a good idea of how the cowl fits and looks when doubled. An added bonus is that you get to see the results of my recent hair cut.

This cowl is truly one of a kind. I will probably give it away because as much as I love it, these are just not my colors.

My most recent FO is a cowl knitted from my own handspun yarn. 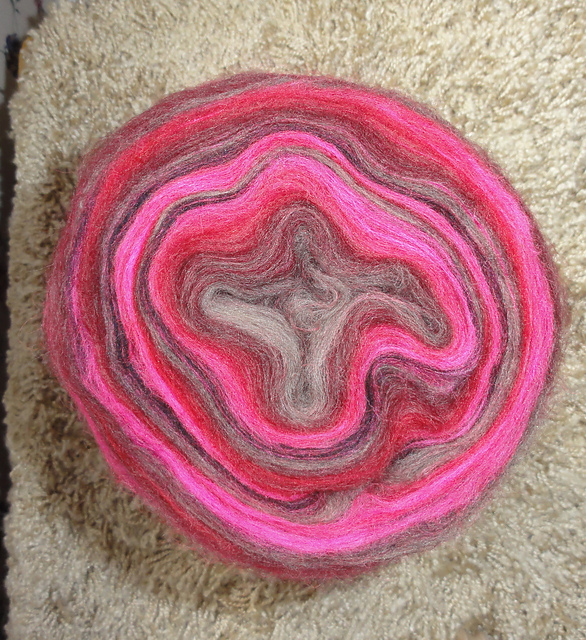 This color way is called faded roses. It has bright pink, dark reds, browns, and brownish grays in it. 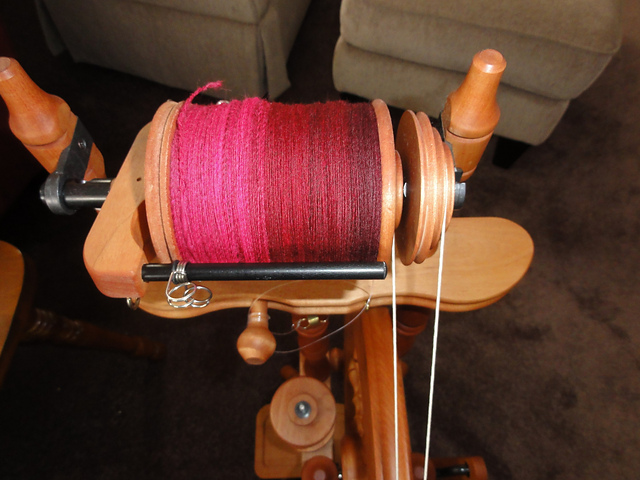 I spun this singles on my Ashford Traveller in double drive using the sliding hook flyer. The singles on the bobbin gives a fair representation of the colors in the bump. Only the brownish grays are MIA in this picture.

which became this yarn… 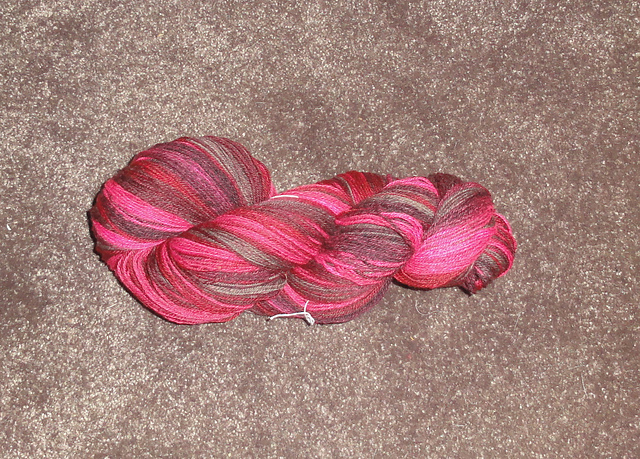 which became this, my Faded Roses Graham-finity Cowl. 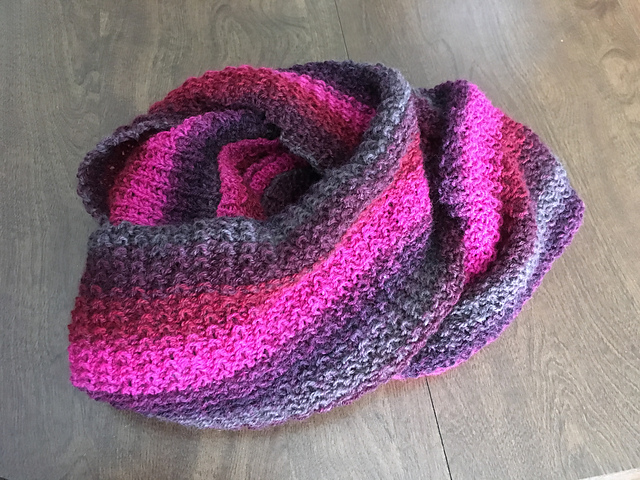 The color in the picture is skewed to purple. I tried to correct it but failed. There is really no purple or purplish in this yarn 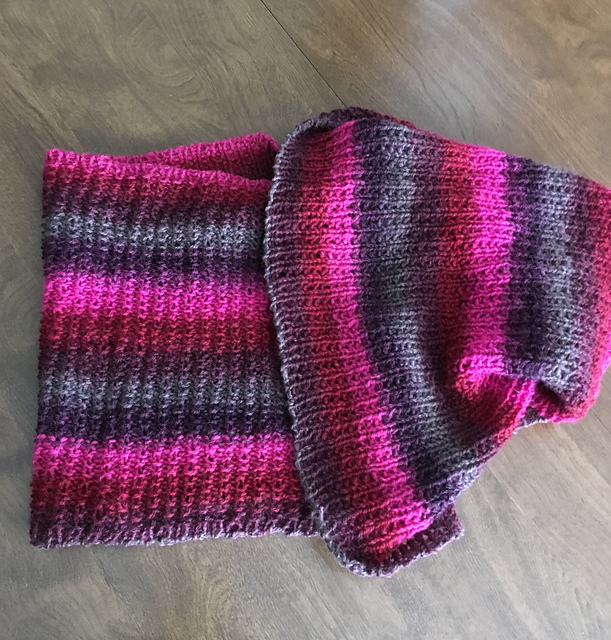 The pattern I used is the Graham-finity Cowl which is a free download on Ravelry. Although the stitch pattern works up differently on each side of the fabric, the resulting cowl is reversible because both sides look like they could be the right side (aka, the public side). 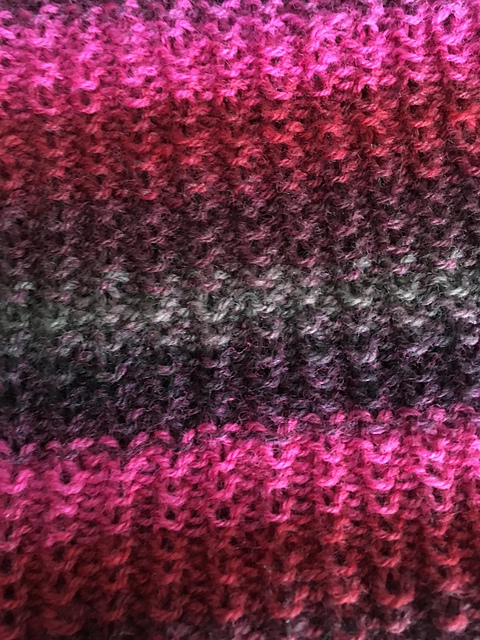 This is the side the designer intends as the “right” side, but when you are knitting the cowl, this side is the “wrong” side, that is, it is not the side that is facing the knitter. 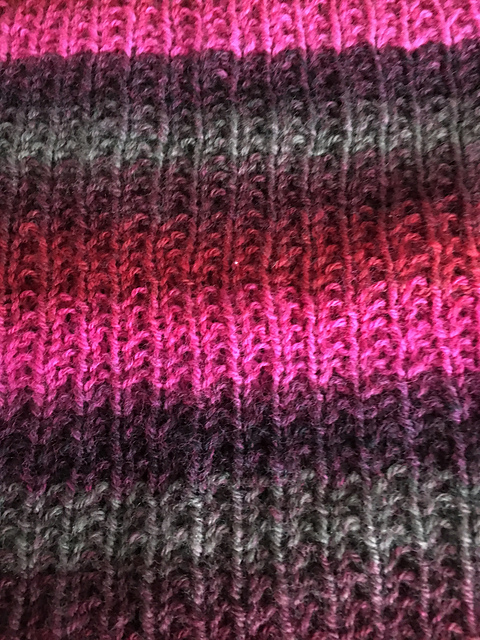 This is the “wrong” side of the cowl, although it is the side facing the knitter when the cowl is being worked.

I haven’t washed and blocked the cowl yet. I expect it to grow a little bit once I have washed it. I have knitted this pattern before using handspun yarn, and I love the resulting cowl and wore it all winter.

This is my Fancy Pants Graham-finity Cowl that I knitted from a lovely 50/50 Merino/silk blend from Woolgatherings that I spun up into a somewhat nubby and a little bit thick-and-thin yarn.

The Graham-finity pattern is great for handspun because there is a lot of texture to the pattern, so minor or even major inconsistencies in the yarn don’t stand out. Also, it is a simple pattern that is easy to memorize, but it doesn’t get totally boring. Yet it makes for pretty mindless knitting, so it is a great pattern for watching hockey, listening to audiobooks and podcasts, or binge-watching television shows. I can’t praise this pattern enough. I love it.

After casting off Faded Roses, I immediately picked up a UFO in handspun that got set aside months ago for baby blanket knitting and pussy hats. I want to finish it before I start yet another baby blanket or get to work on knitting fingerless mitts. I really need to do more knitting and use up some of the handspun I have made.

The Winter Olympic Games are fast approaching, which means the Ravellenic Games will soon begin, which means that I need to finish up all the projects I currently have on my needles, excluding those projects that are in long-term hibernation. Sorry, Stonington Shawl and St. Moritz sweater. You must remain in deep sleep for a while longer because I fell out of love with you. I’m sorry if that hurts your feelings, but we knitters can be a fickle lot.

Anyway, once the Ravellenic Games begin, I need to be able to concentrate on my Ravellenic project. I mean, there may be prizes involved. PRIZES!!

So, just what IS on my needles? Well, I’ve been working on a Downtown Cowl (free Ravelry download) using my very own handspun yarn.

Vintage Roses Downtown Cowl in the midst of casting off

The knitting is done, but the casting off is still in progress. I’m using EZ’s sewn cast off, which is super easy to do, but because there are about a million stitches to cast off, it is taking forever. I cannot stand to cast off more than a couple dozen stitches at a time, then I have to set the cowl aside for a while. It’s like eating an elephant–you do it one bite at a time. 🙂

This pattern is very easy and makes great hockey knitting. I enjoyed every part of knitting it except casting off. If I had it to do over again, I would use the traditional cast off where you knit a stitch and pass the previous stitch over it, but I thought the stretchier edge of the sewn cast off would be better. Well, it’s only better if it actually gets done, and even then, it’s only marginally better. Live and learn. I’m so used to using the sewn cast off on socks where there are only 72 stitches to cast off that I just didn’t think about how tedious it would be to cast off 350 stitches that way. One. Bite. At. A. Time.

Speaking of cowls and handspun, I cast on another infinity scarf using the Graham-finity pattern by Carol Quilici, another free Ravelry download.

My Fancy Pants Infinity scarf is under way.

The yarn is spun from fiber I “won” during the Tour de Fleece last July. It’s a 50/50 Merino/Silk from Woolgatherings’ Fancy Pants fiber club, and I had a blast spinning it. I think this pattern is perfect for the color changes, texture, and barber-poling of this handspun. The yarn is so soft and silky, it will feel heavenly around the wearer’s neck.

I started Fancy Pants on my Denise Interchangeable needles, and after knitting six or seven rounds, I managed to break the cable by snapping the plastic part that locks into the needle off the part that is inside the cable. I am hard on interchangeable needles, I guess. Anyway, I don’t have any fixed circulars in the size I need (5 mm), so I got out the Boye interchangeables. They are working quite nicely. The yarn moves over the join smoothly and easily, but I really don’t enjoy the stiff cable. I guess it’s time to buy some more circular needles in some larger sizes. I’ve given up on interchangeables. They just don’t like me. 😦

But as much as interchangeable needles and I don’t get along, DPNs are my bestest friends. I have started a lovely pair of fingerless mitts, yet another free Ravelry download, using stash yarn that is left over from a sweater I knitted many years ago.

My Lush Fingerless Mitts are not very far along.

I don’t think this yarn is even available any more. It’s Emerald Aran wool from the Blarney Woollen Mills in Blarney, Co. Cork, Ireland. I bought it on-line as a kit that contained the wool, a pattern for 3 different Aran sweaters, and knitting needles. I knitted one of the sweaters, this beautiful Aran lumber (which folks in the US would call a cardigan) with raglan sleeves,

I knitted the lovely Aran sweater on the right years ago.

for my older sister in the smallest size, so I had quite a bit of the wool left, 5 or 6 50g-balls at least. I can knit lots of fingerless mitts with the yarn left over from this sweater. 🙂

The cable and lace pattern used for the Lush mitts is very simple and easy to memorize. It took me about three seconds to know the pattern by heart. I haven’t assigned these mitts a recipient yet. They might be keepers. They will tell me where they belong when they are finished. Yes, my knitting speaks to me. 🙂