So, in my last post, I said that I would talk a little more about this picture: 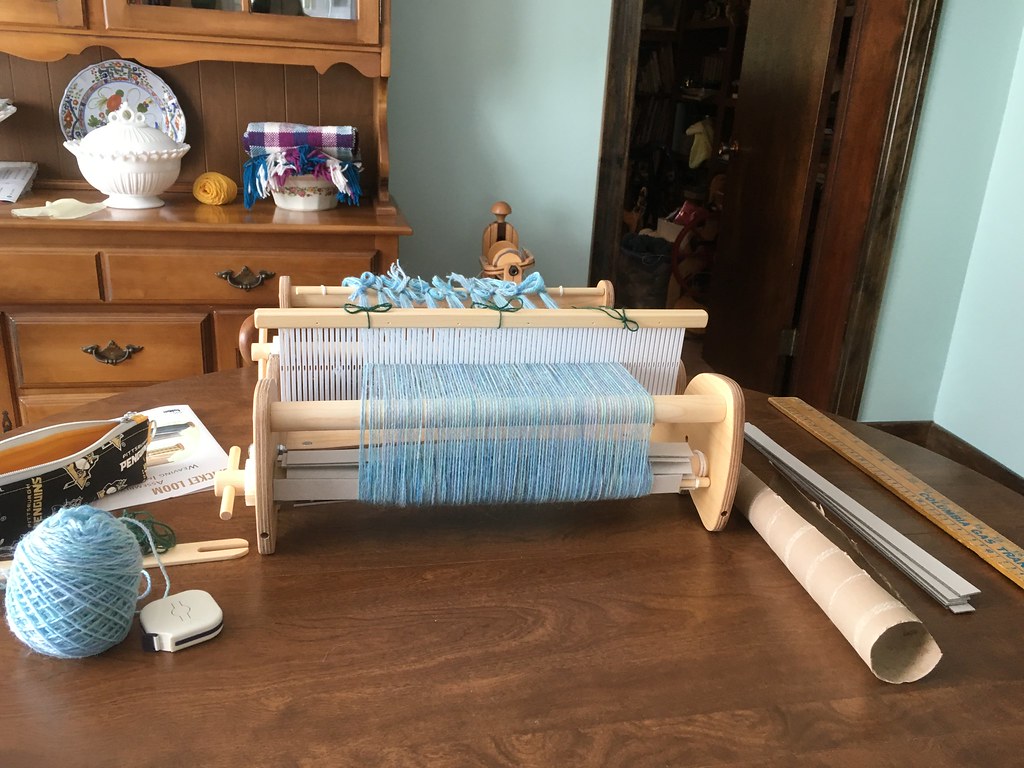 Being a total newbie to rigid heddle weaving, I didn’t notice anything unusual when I took this picture, but to an experienced weaver’s eye, there is a giant red flag waving vigorously. If you look closely at the warp where it winds onto the warp beam, you can see that it is slightly fatter in the center and thinner at the edges. This is because the warp tension is uneven. The tension is tighter on the edges than in the middle. Tension problems are a beginning spinner’s nightmare.

I think there are two reasons why my warp had uneven tension. One is because the yarn I used is pretty stretchy. Stretchy yarn requires extra care when used for a warp and weaving skills that I as a total novice simply lack. But I think the stretchiness of the yarn is just a minor issue here. I think the main reason for the uneven warp is the fact that the warp spread out a bit when I was winding it onto the warp beam. If you look on the left side of the warp, you can see that the part of the warp that goes over the wooden rod (the back beam) is wider than where the yarn comes out of the heddle (the white plastic thing). When this happens, and it happened on both sides of the warp, the threads on the area that spreads are going to be shorter than the threads on the area that doesn’t spread, and that will eventually cause problems with tension in the weaving because the edges will be tighter and the middle will be looser.

Had I noticed this when I was taking the picture, I could have unwound the warp and fixed it. But I didn’t notice it until it was too late to do anything about it. So my weft curved and developed the dreaded smile, which resulted in this: 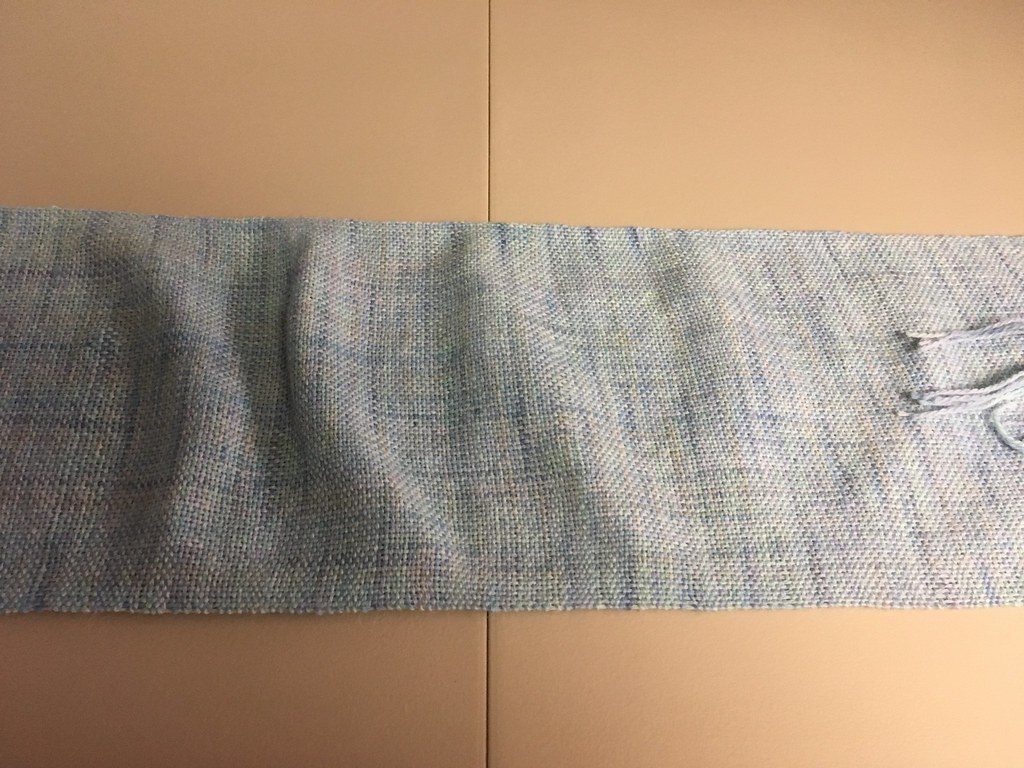 The scarf before wet finishing (washing). It’s fine at the very beginning of the weaving, but as the weaving progresses, it develops pretty severe rippling in the center. At this point I was hoping that wet finishing would lessen the rippling at least a little bit. 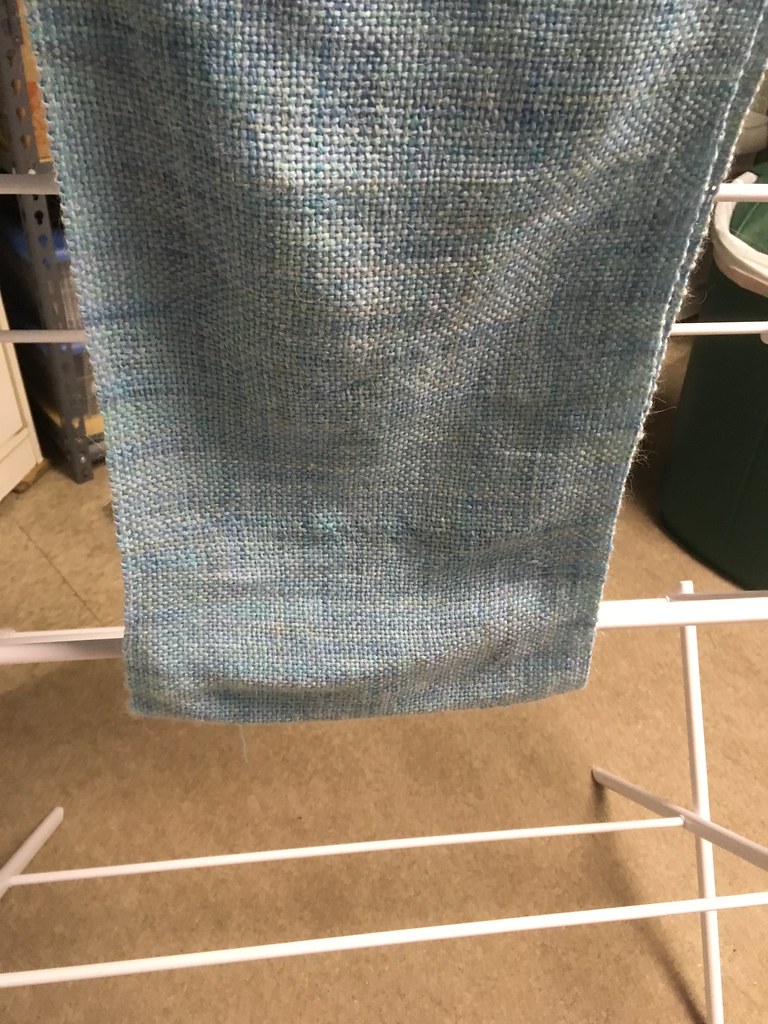 After washing the scarf, I was happy to see that the rippling effect had lessened a little bit. It’s definitely still there, as I knew it would be, but it’s not as bad as it was when the scarf came off the loom. 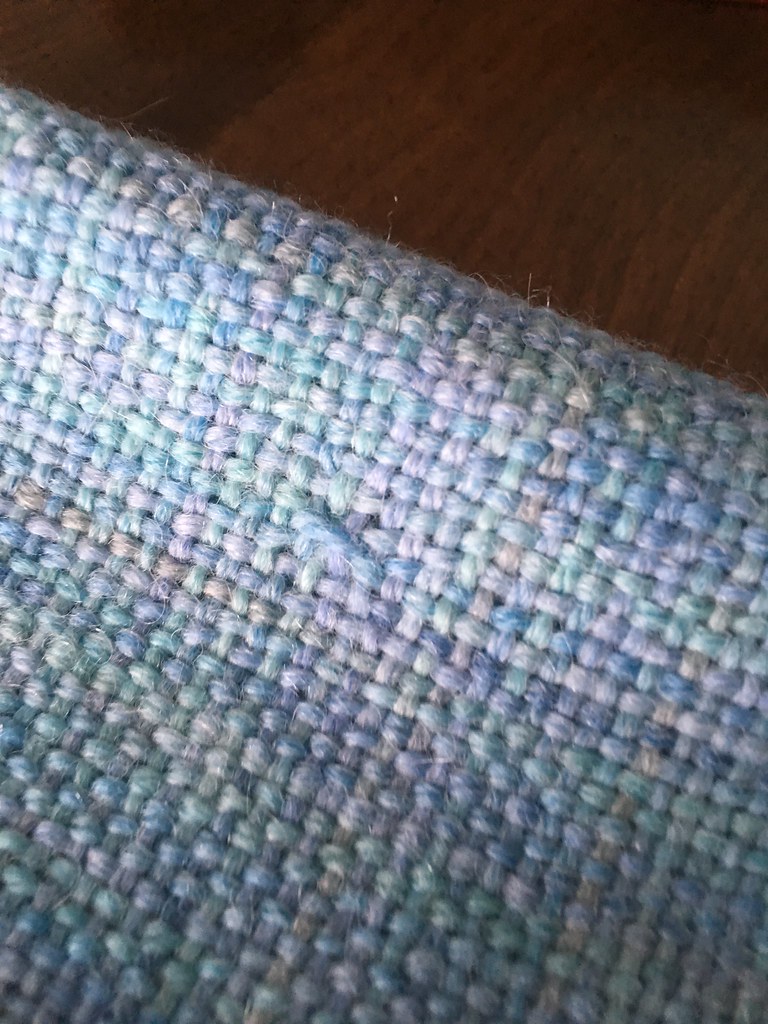 And then there are the 5 or 6 places where I missed a warp thread. This is called a float, and it can be fixed, but it’s best to fix floats before wet finishing. I might try anyway, although I don’t have a lot of leftover yarn. Maybe I’ll fix the ones that stand out most first and if I still have enough yarn, I’ll fix the ones that are less noticeable. 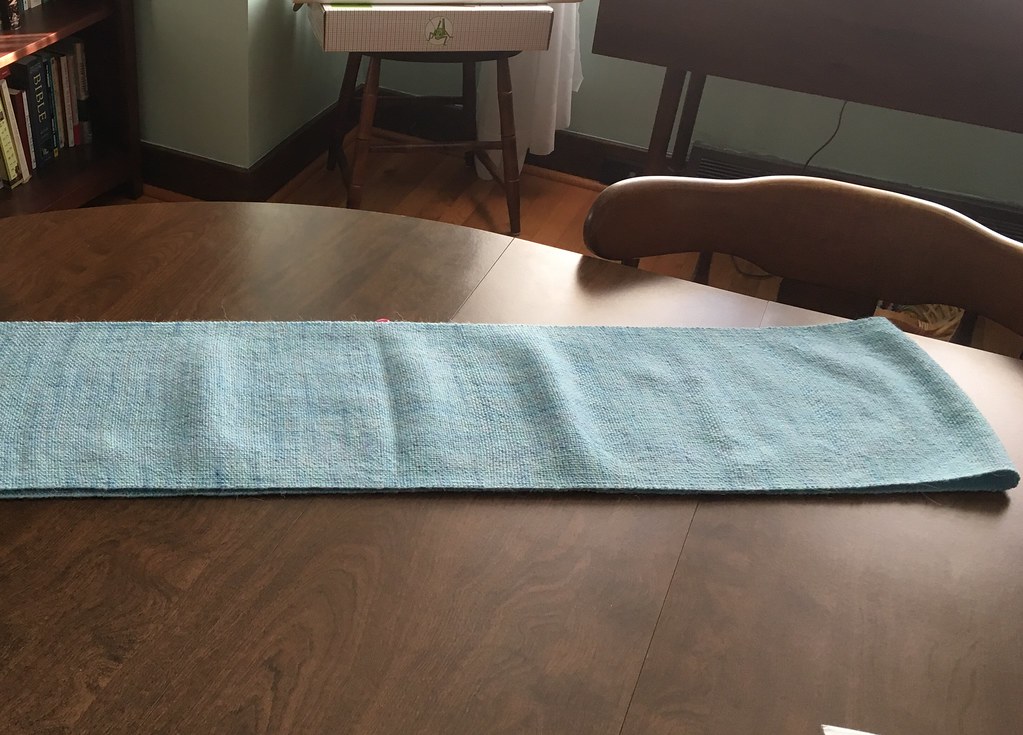 After washing and pressing, the scarf is definitely less ripply. However, my photography is still rubbish. 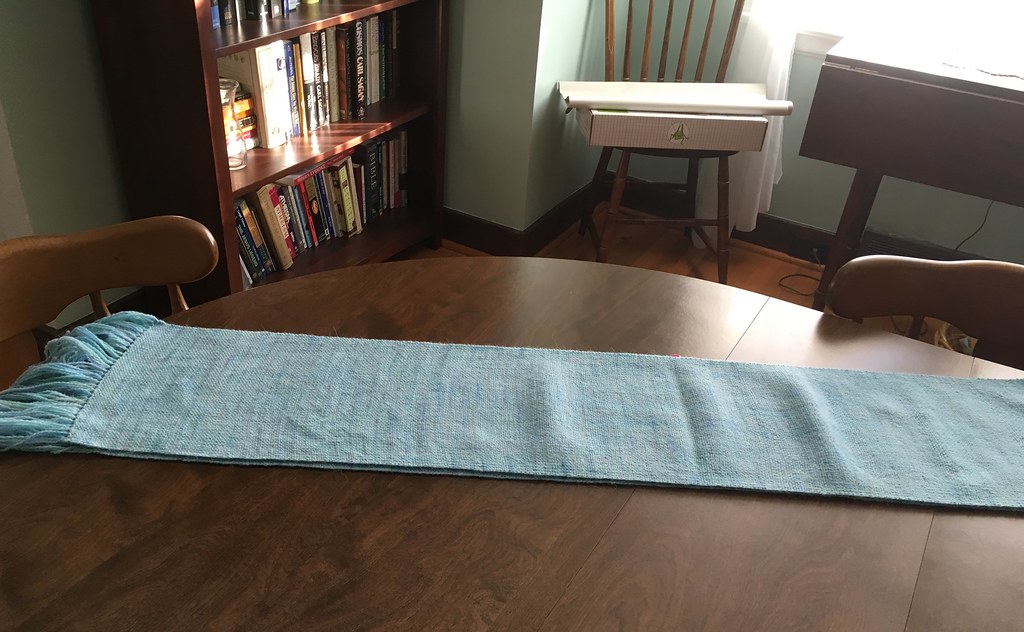 The bottom quarter has no ripples at all. 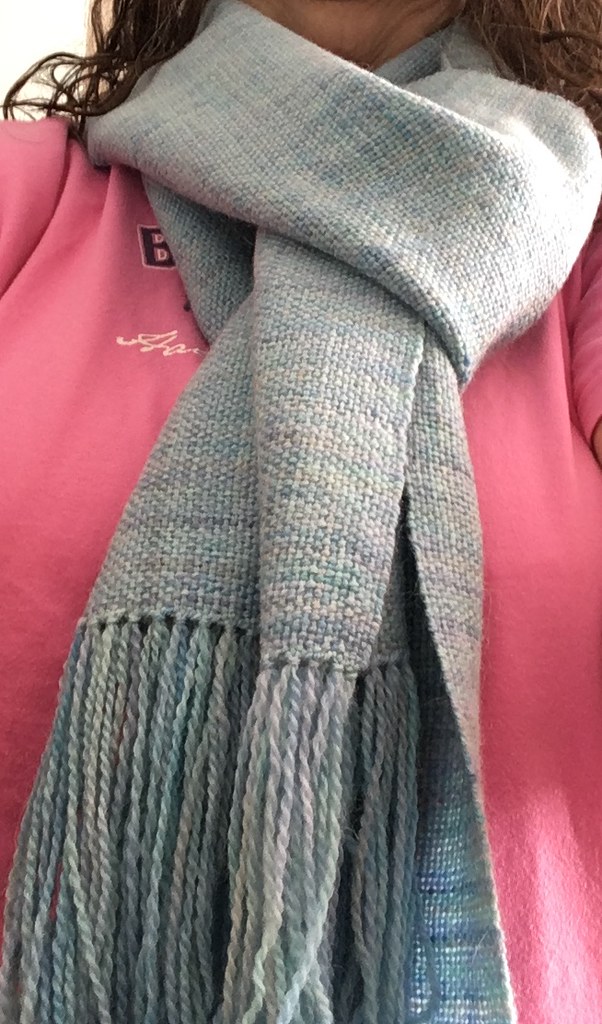 The ripples don’t show when the scarf is being worn. 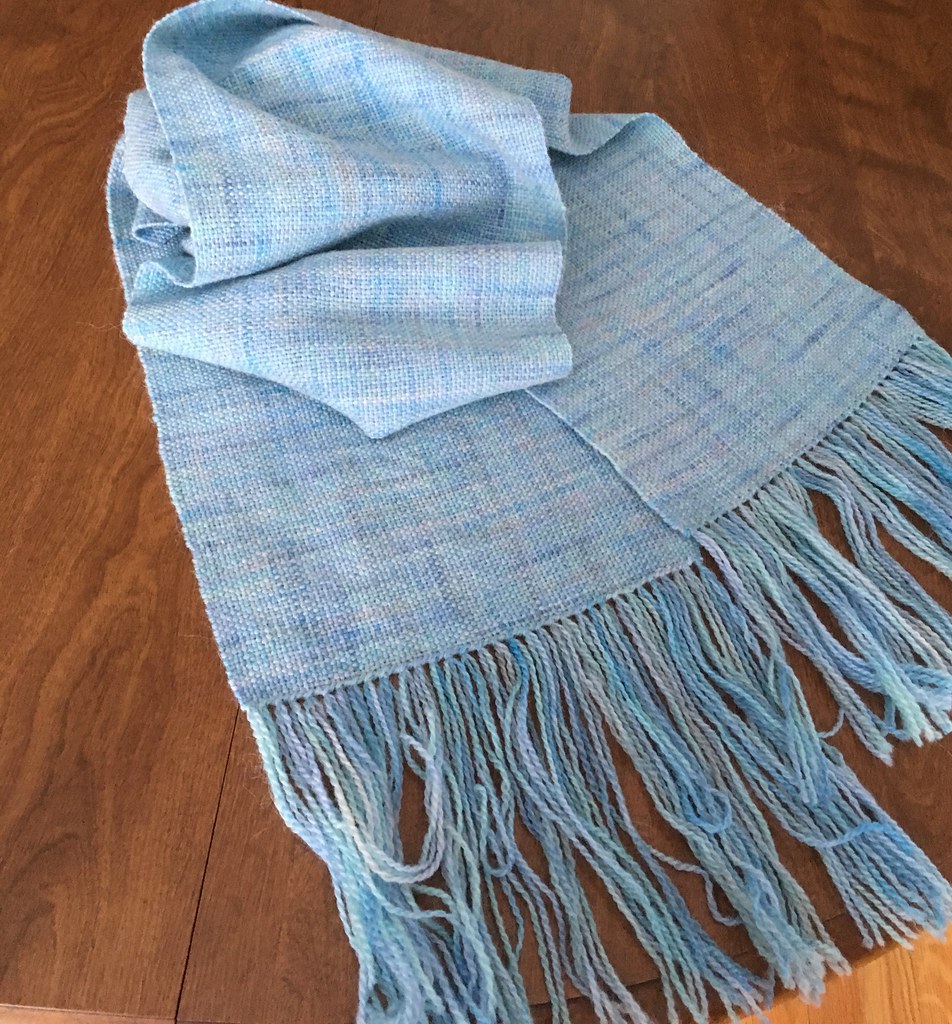 This picture really captures the range and beauty of the colors in this yarn, Knit Picks Imagination (discontinued) in the color way Looking Glass. Yes, the fringes are two different lengths. I haven’t cut the fringe on one of the ends yet. I plan to do a twisted fringe, so I ordered a fringe twister, which should come later this week. I think a twisted fringe finish will look great on this scarf.

I’ll be honest, although I am disappointed that this scarf didn’t come out perfect, I am still very happy with it. I think it is beautiful, even with its imperfections, and I look forward to wearing it this winter.

Project #3, a scarf made with some pretty vintage leftover sock yarn, is on the Cricket and nearly finished. It’s another fail, but for completely different reasons. Stay tuned for more details.